Yield10 Bioscience, Inc., an agricultural bioscience company, today announced an open enrollment program for growers for contract production of winter Camelina. Farms located in Montana and Idaho, as well as southern Alberta (Canada) and Saskatchewan (Canada) are eligible to participate in the program. Yield10 is offering farmers offtake production contracts for winter Camelina with net returns similar to canola. 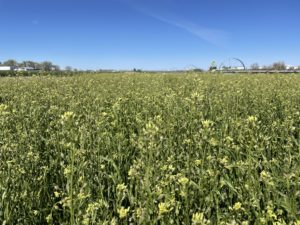 One of Yield10’s primary goals is to establish Camelina as a revenue generating winter cover crop that is also a low-carbon source of feedstock oil for use in the growing biofuels market. As a cover crop, Camelina has the potential to help reduce soil erosion, improve soil quality, and reduce nutrient run-off from land that is used for row crop production. Yield10 is developing proprietary varieties of winter Camelina that have been grown in field tests over the last three years.

“We look forward to engaging with farmers to introduce the positive attributes of winter Camelina and the role it could play as a cover crop and in crop rotations,” said Darren Greenfield, Senior Director of Seed Operations at Yield10 Bioscience. “Based on our field work to date, I am confident that winter Camelina will be a successful crop for growers in the U.S. and Canada, specifically within the regions of Montana, Idaho, Alberta and Saskatchewan. Our efforts during this winter season will be our first steps toward partnering with farmers to drive adoption of this promising new oilseed crop.”

In winter 2022/2023, Yield10 plans to contract with growers for planting high-performing non-regulated winter Camelina as part of an initiative to establish pre-commercial production and offtake relationships in the biofuels market. Yield10 plans to expand the planting acreage going forward, introducing herbicide tolerant Camelina varieties to enable large acreage planting over time. Yield10 is already field-testing herbicide tolerant Camelina varieties this year to identify lead and back up lines for commercial development and regulatory approval.

Yield10 has outlined a commercialization plan for Camelina as a platform crop to address three markets: Camelina oil for use as a biofuels feedstock oil; Camelina meal for use in animal feed; and longer term, PHA bioplastics produced in Camelina for use as a biodegradable plastic.

About Camelina sativa
Camelina sativa, commonly known as Camelina or false flax, is an annual oilseed plant in the mustard family that is native to Europe. Camelina has the potential to replicate the development of modern canola from rapeseed on an accelerated timeline based on modern technologies, including genomics and genome editing. Additionally, Camelina grows on marginal lands, displays early maturation, has enhanced drought and cold tolerance, and requires fewer inputs than other oilseed crops. With social conscience and sustainability in mind, Yield10 is leveraging its innovations in Camelina to use it as a platform crop for producing low-carbon feedstock oil for renewable fuel; omega-3 nutritional oils; high-protein meal; and PHA bioplastic.

About Yield10 Bioscience
Yield10 Bioscience, Inc. is an agricultural bioscience company that is using its differentiated trait gene discovery platform, the “Trait Factory”, to develop improved Camelina varieties for the production of proprietary seed products, and to discover high value genetic traits for the agriculture and food industries. Our goals are to efficiently establish a high value seed products business based on developing superior varieties of Camelina to produce biofuel feedstock oils, PHA bioplastics and omega-3 (DHA+EPA) oils and to license our yield traits to major seed companies for commercialization in major row crops, including corn, soybean and canola. Yield10 is headquartered in Woburn, MA and has an Oilseeds Center of Excellence in Saskatoon, Canada.