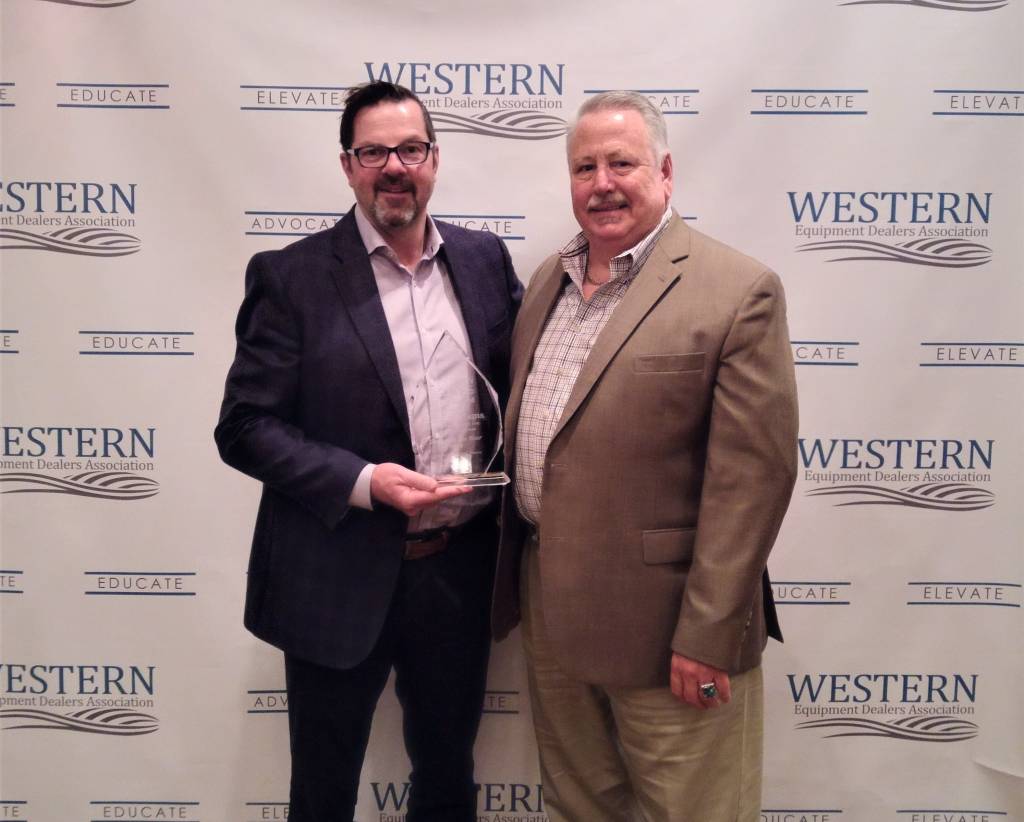 The Western Equipment Dealers Association (WEDA) is honored to present the prestigious Merit Award to Harley Adams of Concordia Tractor, Inc. (CTI), as the 2018 Dealer of the Year.

As a true mark of excellence, the annual WEDA Dealer of the Year award recognizes exceptional performance and outstanding community service that is an inspiration to our industry. By presenting this annual award, WEDA honors an individual dealer for their leadership within the industry, high business standards and tireless efforts to improve their communities and the world around them.

Harley was raised on a wheat, cotton, and cattle farm in Southwestern Oklahoma. The Adams family also operated a custom combine and cotton harvesting business. He married his high school sweetheart after graduation and the two frightened farm kids went off to college-he and Darla will celebrate their 50thAnniversary in 2019.

He was the first in his family to attend college, and consequently, not well prepared as the young couple ran out of money at mid-term. Desperate for a job, Harley visited Paul DeFehr, the local John Deere Dealer, hoping to capitalize on his custom harvest background. DeFehr explained that they did not hire in January, and to come back later in the spring. After three visits in three days, DeFehr relented and Harley had the job that would set the course for the rest of his life.

After graduation, Harley took a job with John Deere Company, Kansas City. He located in Salina, Kansas as a Trainee in August 1972 and was promoted to Territory Manager in March 1973, becoming the youngest TM ever appointed at age 22. His equipment knowledge and dealer experience were paying off and he was well on his way in the corporate world, but he had a different idea.

In 1978, Harley became a partner and worked in Ag Sales at Concordia Tractor, Inc. (CTI), a John Deere dealer in North Central Kansas. Harley’s brother Johnny joined the company in 1980, also becoming an owner. The original partner retired unexpectedly in 1984 and Harley became the GM of the dealership with a new partner.

Harley, along with his brother, had promised their local customers that if they would support them, they would totally commit themselves to supporting their customer’s business. That meant 100% of their time, energy, and resources – no distractions, no other business interests, just total devotion to John Deere and supporting the local customers.

CTI concentrated on parts and service support and developed a great group of employees, and when the sales demand started in the early 90’s, they were ready. Customers came from other dealer areas to do business with CTI – they had survived, and their commitment had paid off.

The Adams brothers grew to four locations between 2000 and 2007 and increased their level of customer support with inventories, training, and technology. Son Kyle and nephew Michael joined along the way. Harley shared, “John Deere was the vehicle during the ride, but the customers and employees have been the passengers, and they are the most important.” With a primary focus on satisfying employees and customers, Harley added, “Happy employees equal happy customers equal happy John Deere.”

Harley has served on many boards and committees throughout his years serving the industry. CTI has been a WEDA member for 52 years, and Harley served on the board during the Oklahoma-Texas merger in 2003 and President in 2005.

“Harley Adams is a well-deserved recipient of this award,” said John Schmeiser, CEO, WEDA. “Harley and his team have set the standard for service excellence and world-class customer experience.”

This prestigious award was presented to Adams at WEDA’s 2018 annual dealer conference which was held in Scottsdale, Arizona, December 5-7, 2018. The Dealer of the Year award recognizes an individual dealer for their leadership within the industry, their dedication towards growing their business into a successful entity and their commitment and legacy to their community.
-30-

About Western Equipment Dealers Association
WEDA represents over 2,000 farm, industrial and outdoor power equipment dealers in every Canadian province with the exception of Quebec – as well as nine states in the U.S. – Alaska, Idaho, Kansas, Missouri, New Mexico, Oklahoma, Oregon, Texas, and Washington. WEDA also represents 1,250 U.S. hardware retailers in the same U.S. states plus Arkansas, Louisiana and Nebraska. As the largest equipment dealer association in North America and the largest regional trade association of its kind in North America, WEDA offers members a comprehensive array of dealer-oriented legislative, educational and communications services, ranging from lobbying to legal, accounting and marketing support. WEDA also provides products and services that include industry and manufacturer relations, as well as industry information and intelligence. The Association’s many programs are either available only to members or provided at a reduced cost for members. Visit https://westerneda.com for more information.